The day started early for the Icelandic fitness competitors, we had to wake up at 3 am on a Wednesday morning.

We were booked on a flight with WOW air at 6.45 in the morning so we had to wake up at 3 am to get ourself ready and drive to KEF airport. There were 7 fitness competitors (Karen Lind came on Thursday), one trainer, one boyfriend and the legendary Freydís (Bikinis by Freydís) that arrived at KEF airport happy and excited for our journey to Madrid. 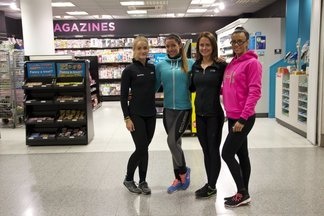 None of the Icelandic air companies fly directly to Madrid at this time of the year so we had to make a "short" stop at Gatwick airport in London. Our stop was 5 hours. Witch felt like, well 5 hours.

Because the girls were in the middle of a water depletion the trips to the toilet were pretty frequent and actually one of the stewardesses said that if this would continue she would have to charge us an extra seat, the toilet:)

We arrived in Madrid around 21.40 on Wednesday night and the outside temperature was 25 degrees celsius, which is not what we are used to in September in Iceland. 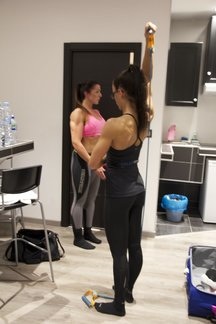 The hotel that we are staying at is great and located at a pretty busy shopping street. Of course the girls are just relaxing now but on Sunday they will probably enjoy the cheap prize in Madrid. Everybody then ended the day with a good exercise with a resistance band, mini band and a couple of water bottles.

On Thursday was registration and weigh-in at the Arnold Classic Europe expo. We decided to show up early so we could finish early and rest for the remainder of the day. but NO!! We had to wait in line for 4 hours, not the best thing for a Fitness competitors 1-2 days before a show. The girls got very tired in their legs so we had them sitting on the floor and on their bags.

The waiting took forever, as it seemed, but the Icelandic girls were relaxed and happy. We finished at 14.30 and the girls arrived at the hotel around 15 and have been there relaxing, training, taning, posing and eating since.

Tomorrow, Friday, Una Margrét and Nadezeda Nikita will compete and everyone will of course be there and cheer them on...

This has truly been an amazing day. We had two competitors from Iceland competing. 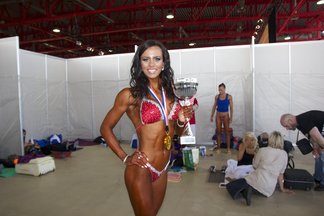 First there was Una Margrét competing in Junior Bodyfitness, now Una is the 2014 Junior European Champion so we felt pretty good coming in to the show but of course you never know who will compete against you. There were 6 girls competing in the Junior class this time. The stongest, beside Una Margrét, was Marie Steffen witch was the runner up at the 2014 European Championships as well as this 19 year girl from Norway, now this girl is BIG for a Bodyfitness competitor and later today we were told that she is going to compete in Physique class next year.

Well everything worked out as planned and Una Margrét took home the gold. Marie took second and the 19 year old was third. So a great start of the weekend.

The second competitor from Iceland was Nadezda Nikita Rjabchuk competing in Bikini Fitness +35, now this is a class that is growing in numbers, I think I counted somewhere between 30-40 girls and WOW some of them girls were in good shape. Well to make a long story short Nikita didn´t make it in to the top 15 at this time. This was her first competition at a big show like the Arnold´s and she´s determined to come back a lot stronger next time. 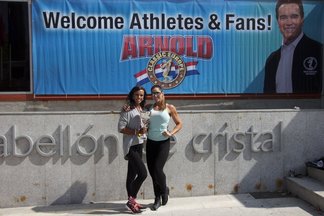 Tomorrow the Bikini Fitness girls are competing as well as Ásta Björk and Una Margrét in the open Bodyfitness class.

Also the "Team Iceland Fitness" girls are doing a photo shoot later in the day.

There is now doubt in my mind that the Icelandic girls will do their very best tomorrow and make everyone watching at home proud. 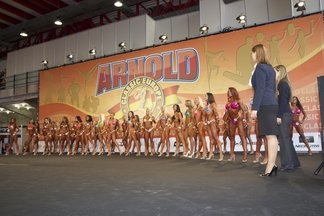 Saturday started at  6 am with the girls taking a short body shower and after that putting on the last layer of competition tan. Putting on their make-up, doing their hair, putting on the fake eye lashes. Eat a couple of meals and prepping them self mentally for the competition.

The first Icelandic competitor to go on stage was María Kristín in Bikini Fitness -163cm class. María Kristín placed 5th in this class a year a go and was hoping to go even further now. There were 40 girls in her class and a lot of good ones. María Kristín didn´t go in to the top 15 at this time:( The judges must be pretty good at the Arnold´s because they can go from 40 girls down to 15 by only lining them up in one line, making them just do a front pose and nothing else.

Next was Ísabella Ósk in Bikini Fitness -166cm class, this was her first competition abroad for the IFBB federation. She didn´t place in the top 15 at this time. 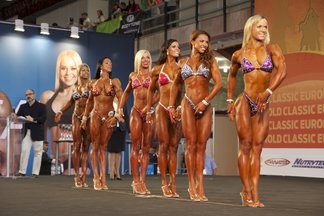 Ásta Björk was next on stage in Bodyfitness +168cm class. Ásta Björk is still a junior like Una Margrét but because how muscular she is we thought she might have a better chance in the open class. Ásta took 9th place.

Simona then stepped on stage in Bikini Fitness -169cm class, this was her first competition abroad and you could see she was nervous and a bit stiff. There were 17 girls in her class and she took 12th place. 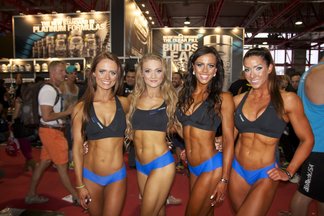 At last there was Karen Lind competing in Bikini Fitness -172cm class. I would say that this was the weakest class of them all and i thought she would win it for sure. 3rd place was the final result.

The Team Iceland Fitness girls then had a photo shoot at the expo and like always the "fans" wanted pics with them, so a photo shoot that was supposed to take 1 hour ended in 4 hours. Lot of great pics, lots of fun and maybe a contract or two for the girls.

The girls ended the day by going to Hard Rock cafe and eat a good meal and a dessert or two. 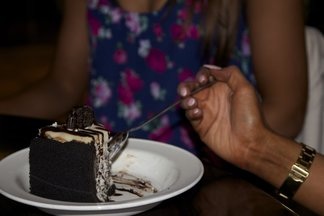